Didier Drogba Net Worth and Salary: Didier Drogba is a former Ivorian footballer who has a net worth of $90 million and was at one point earning a salary of $15 million per year. Widely-recognized as one of the greatest African players of all time, Drogba was also one of the most prolific strikers ever to wear a Chelsea jersey. Known for his power, striking ability, and his tendency to score important goals during big matches, Didier earned quite the reputation during his playing years. He also helped the Ivory Coast national team reach new heights, captaining the side and becoming the all-time top scorer.

While Drogba's years at Chelsea definitely represented his peak, he also played for a range of other teams, eventually becoming the first-ever player-owner of a soccer team of the Phoenix Rising. After a long career, Didier retired at the age of 40.

Early Life: Didier Yves Drogba Tebily was born on March 11th of 1978 in Abidjan, Ivory Coast. At the age of five, he was sent to live in France by his parents, but he returned at age 8 after feeling homesick. However, after both of his parents lost their jobs, he was sent back to France once again. In 1991, his parents traveled to France to join him there, and the family eventually settled in the Paris suburb of Antony.

After Drogba reunited with his parents and siblings, he started to take soccer more seriously. He joined a local youth team and eventually drew the attention of the semi-professional club Levallois. Despite scoring many goals for the side, the 18-year-old Didier failed to make an impression on any major clubs, and it wasn't until the age of 21 that he finally made his breakthrough.

Career: Drogba is seen as a "late bloomer" because he only started playing professionally at the age of 21. He first made his name with Le Mans, scoring inconsistently for the most part but proving his potential. Before the 2001-02 season, Didier signed with Ligue 1 side Guingamp for 80,000 pounds. Although his first season was lackluster, he followed up next year with 17 goals in 34 appearances. This attracted the attention of Olympique de Marseille, who signed him for a 3.3-million-pound transfer fee.

Drogba spent just one year at Marseille, scoring 19 goals and promptly signing for Chelsea. The English club paid 24 million pounds for the promising striker, and this would prove to be a wise investment. Although he started a bit slow, Chelsea won the league title for the first time in 50 years during Drogba's first season at the club. Didier really started to come into his own during the 2006-07 season, during which he scored 33 goals. He also won the Golden Boot that year.

After Mourinho left the club, Drogba was left feeling unsure about the future of the club. However, he remained committed to the club. Throughout the next few seasons, Drogba was regularly accused of cheating, violent play, or intentional handballs. However, he continued to play at a high level. In 2008, he was sent off after slapping Vidic in the UEFA Champions League Final.

Over the next period, Drogba struggled with injuries and became embroiled in controversy once again after shouting expletives into a video camera after he felt a referee was not being fair to Chelsea. Chelsea achieved the double in the 2010-2011 season, and they followed up in 2012 with a Champions League win. Drogba scored the winner. Didier then played for Shanghai Shenhua and Galatasaray for a number of years. He returned to Chelsea for one final year, winning the league in 2015 before finishing off his career with the Montreal Impact and Phoenix Rising.

Playing Style: Didier Drogba is known for his physical style of play, although he backs this up with significant speed and excellent striking. Even when multiple defenders tried to freeze him out of the game, Didier usually found a way to break through and attempt chances on goal. A huge part of Drogba's legacy is his high level of performance during big games. The fact that he scored 10 goals in 10 finals, winning 10 trophies in the process illustrates this point perfectly.

Although Drogba racked up plenty of assists during his career and showed tremendous vision and creativity, he often received the ball and immediately leveled a powerful, accurate strike on goal. He also exhibited excellent free-kick technique, powering the ball into the back of the net with a side-footed strike. Numerous high-profile defenders have stated that Drogba was the toughest opponent that they ever faced.

Relationships: After sparking a relationship with Lalla Diakite, Drogba has had three children. His eldest son later became a professional footballer. Many of his other family members are current or former soccer players, such as his brothers and an uncle.

Leadership Role in Ivory Coast: Didier Drogba has played a major role in stabilizing the nation of Ivory Coast. He publicly begged combatants to stop fighting after Ivory Coast had qualified for the World Cup in 2006, and he was successful in starting a ceasefire. He then strategically pushed for a qualifying match for the African Cup of Nations to be held in Bouake, a position held by the rebels. This helped ease tensions in the nation. In recognition of these actions, Drogba was appointed as a Goodwill Ambassador by the United Nations Development Programme.

In 2009, Drogba donated 3 million pounds to the construction of a hospital in his hometown of Abidjan. He had earned the money as part of a brand endorsement deal with Pepsi. Chelsea then donated their fee for the deal to Didier's hometown as well. Initiatives such as these are typically handled through Drogba's "Didier Drogba Foundation." He also teamed up with Nike and U2 frontman Bono to spread awareness about HIV and AIDS. In addition, Drogba was also vocal in the fight against ebola.

Additional Ventures: In 2013, Drogba reportedly purchased a 5% stake in a gold mine in Ivory Coast. The venture was seen not only as a financial investment for personal reasons, but also an investment in the infrastructure of his home nation.

Real Estate: In 2009, it was reported that Didier had purchased a property in Surrey, England for an undisclosed fee. Drogba apparently wanted to lay down roots in the UK, as his three children were quite settled in the nation at the time. 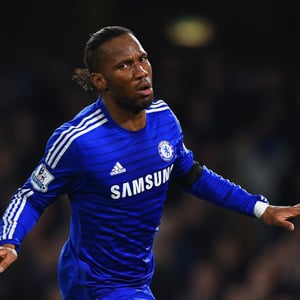