David Silva Net Worth and salary: David Silva is a Spanish footballer who has a net worth of $55 million. David Silva's salary is $15 million per year. He also earns an estimated $1 million per year from endorsements with companies like Adidas. That's enough to make him one of the 20 highest paid soccer players in the world.

Born David Josué Jiménez Silva on 8 January 1986, in Arguineguín, Spain, he is playing for Manchester City and the Spanish National Team, mainly in the positions of an attacking midfielder, winger or second striker. A member of the Spanish international football team since age 20, Silva was only eight years old when he first set foot in the sport. Blessed with inner talents that he perfected over the years, Silva was part of the winning squads on three consecutive international tournaments: UEFA Euro 2008, 2010 FIFA World Cup and UEFA Euro 2012. As a highlight period of Silva's pro career comes his six-year tenure with Valencia CF, when he played in more than 150 games and fetched one Copa del Rey along the way. He joined his current team of Manchester City in the summer of 2010, and he has since won the FA Cupand Premier League. Thanks to his passing ability and possession-retaining qualities, David Silva is often called "Merlin" by his teammates. 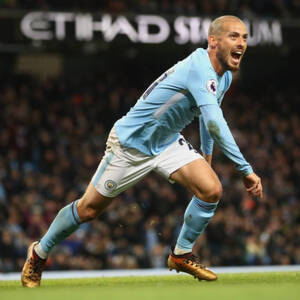