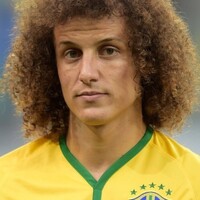 David Luiz Net Worth and salary: David Luiz is a Brazilian professional soccer player who has a net worth of $20 million dollars. David Luis Moreira Marinho was born in Diadema, Brazil in April 1987. He played his youth soccer for Sao Paulo and Vitoria and was called up by Vitoria to their senior squad in 2006. He was loaned to Benfica in 2007 and ended up transferring there until 2011. From 2011 to 2014 Luiz played for Chelsea and in 2014 he joined Paris Saint-Germain. Luiz is a central defender that can also play as a defensive midfielder. With Chelsea he won the Champions League and the FA Cup. His June 2014 transfer from Chelsea to Paris Saint-Germain set a world record transfer fee for a defender at $50 million pounds. He started representing Brazil on their Under-20 squad in 2007. In 2010 he was called up to Brazil's senior club. With Brazil he won the 2013 FIFA Confederations Cup and made the semi-finals of the 2014 FIFA World Cup. Luis also won the UEFA Europa League with Chelsea and won three Taca da Ligas and a Primeira Liga with Benfica. When Thiago Silva was suspended, Luiz captained the Brazil team in their 7 to 1 loss against Germany in the semi-finals of the 2014 World Cup.