David Icke net worth: David Icke is an English writer, public speaker, and retired professional soccer player who has a net worth of $10 million. David Icke was born in Leicester, Leicestershire, England, and grew up very poor and very shy. He showed an aptitude for soccer and quickly realized that it could be his ticket out of poverty. He went on to play for the Coventry City Youth League, and then to play for Hereford United, before rheumatoid arthritis in all of his joints, forced him to give up professional play at age 21. He then found work as reporter with the Leicester Advertiser, and eventually became the sports presenter for the BBC program, "Newsnight". From there, he went on to work for BBC Sport until 1990. He then shifted his focus to New Age philosophy and energetic healing, and began publishing books about his thoughts. After a press conference, in which he predicted the end of the world backfired, and the subsequent interviews about the press conference which further alienated his sports audience, he was dropped by the BBC. He ended up creating a new career focused on writing, lecturing, and teaching New Age conspiracism. 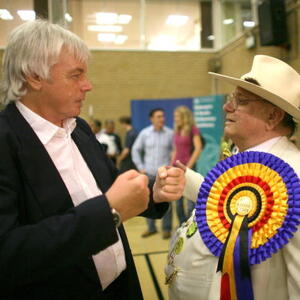