David Alaba Net North and salary: David Alaba is an Austrian footballer (soccer player) who has a net worth of $20 million dollars. Born June 24, 1992 in Vienna, Austria, he plays for German club Bayern Munich and the Austria national football (soccer) team. He holds Austria's record as the youngest player to play for the team, debuting for them in 2009 as a 17-year-old.

He has played in a multitude of roles, including central midfield and right and left wing, but as of spring 2012 emerged as a talented left back, a role that Bayern coach Jupp Heynckes saw Alaba continuing in. Alaba began his career with SV Aspern, his local club in Aspern, in the 22nd district, Donaustadt, before joining the youth setup of FK Austria Wien at age 10. He quickly rose through the ranks and in April 2008 was named on the first-team substitutes' bench for a Bundesliga match. He also played five times for Austria Wien's reserve team before leaving in the summer of 2008 to join German Bundesliga side Bayern Munich. As an Austrian at under-17, under-19 and under-21 level, he was called up to the senior Austria national team for a match against France in October 2009. He made his debut as the youngest player in the history of the Austrian national team. He scored his first goal for Austria on October 16, 2012 in a World Cup Qualifying game at home to Kazakhstan where Austria ran out 4–0 winners. At the age of just 19, Alaba won the prestigious vote for Austrian Footballer of the Year in 2011. In December 2012, he received the award for the second consecutive year. On 10 September 2013, Alaba scored the only goal of the game against Ireland in the 84 minute to give Austria a 1–0. He scored the final goal in Austria's 3–0 win in the final qualification match against Faroe Islands. Alaba ended the 2014 FIFA World Cup qualification campaign as Austria's top scorer with six goals. 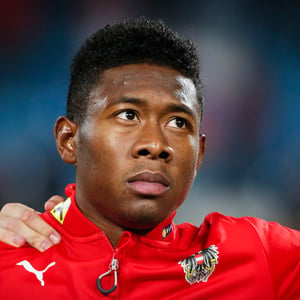