Daniele De Rossi net worth: Daniele De Rossi is an Italian professional soccer player who has a net worth of $25 million dollars. Daniele De Rossi was born in Rome, Italy in July 1983. He started his youth career for Ostia Mare in 1997 and joined Roma in the 2000. In 2001 he was called up to Roma's senior team and has played there ever since. He is a midfielder and is Roma's vice-captain. He has been nicknamed Capitan Futuro due to the fact that he is likely to become captain someday. De Rossi is a versatile player who can tackle, shoot, pass, and defend. He has assisted Roma in winning the Coppa Italia twice as well as the 2007 Supercoppa Italiana. In 2006 De Rossi was the Serie A Young Footballer of the Year and in 2009 he was the Italian Football of the Year. He has also played for the Italian national team since 2001. He was a member of the Italian 2006 FIFA World Cup championship team. He also played in the World Cups in 2010 and 2014. In 2004 his club won the EUFA European Under-21 Championship. De Rossi also earned an Olympic Bronze Medal in 2004. He has been a spokesperson for Pringles and has appeared in a commercial for Adidas. He was on the cover of the Italian version of the FIFA 09 game. 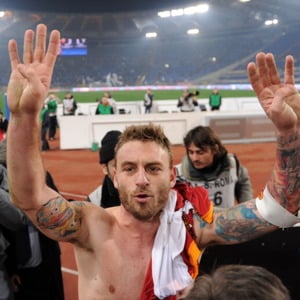