Through 2013 he's scored 86 goals in 582 Premier League appearances. Internationally, he scored 8 goals in 100 matches for the Republic of Ireland between 1998 and 2012. He played in the 2002 FIFA World Cup and was a captain for the Ireland team in the 2012 UEFA Euro 2012 event. Damien Duff has also earned a number of honors, including the Football League Cup with Blackburn in 2001-02 and Chelsea in 2004-05, the FA Community Shield with Chelsea in 2005, two Premier League championships with Chelsea in 2004-05 and 2005-06, the UEFA Intertoto Cup with Newcastle United in 2006, and the Nations Cup with Ireland in 2011. He also made it to the championship match of the 2010 UEFA Europa League with Fulham. Individually, he's also earned a spot on the Football League First Division PFA Team of the Year in 2000-2001 and UEFA Team of the Year Honors in 2002. 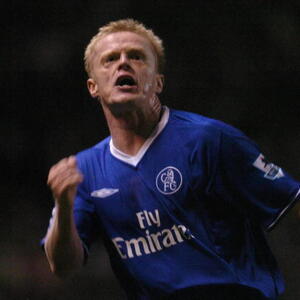