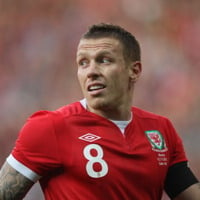 Craig Bellamy net worth and salary: Craig Bellamy is a Welsh professional soccer player who has a net worth of $25 million. Craig Bellamy was born in Cardiff, Wales in 1979. Craig Bellamy plays forward for Cardiff City, a Premier League club team as well as the Welsh national team. Bellamy has played for nine professional soccer teams since 1996. He played for Norwich City from 1996-2000, Coventry City from 2000-2001, Newcastle United from 2001-2005 with a loan out season to Celtic in 2005, Blackburn Rovers from 2005-2006, Liverpool from 2006-2007 and again from 2011-2012, West Ham United from 2007-2009, Manchester City from 2009-2011 with a loan out season to Cardiff City in 2010-2011, and has been playing for Cardiff City since 2012. Craig Bellamy played for the Welsh National Team from 1997-1998 and 1998-2013 and the Great Britain National Team in 2012. In 2008, Craig Bellamy funded the building of the Craig Bellamy Foundation for disadvantaged children in Freetown, Sierra Leone and has invested over $1 million of his own money to build a not-for-profit football academy with UNICEF in the Kono region. Craig Bellamy has married to Claire, his high school sweetheart since 2006. The couple have three children, sons Ellis and Cameron, and daughter Lexie.