Cobi Jones Net Worth: Cobi Jones is an American soccer analyst and retired professional soccer player who has a net worth of $3 million. Cobi Jones was born in Detroit, Michigan in June 1970. Jones played youth soccer for the Westlake Warriors from 1985 to 1988 and for the UCLA Bruins from 1988 to 1991.

He played professionally from 1994 to 2007. Cobi played for English Coventry City and Brazilian Vasco de Gama for a season each. In 1996 he signed with the Los Angeles Galaxy of Major League Soccer. Jones was a midfielder who returned from playing overseas to help the new MLS become successful. He also represented the United States in international play from 1992 to 2004. With 164 caps he holds the record for most U.S. appearances. He played in three FIFA World Cups in 1994, 1998, and 2002. He also played at the 1992 Summer Olympics in Barcelona and in CONCACAF Gold Cups. After retiring Jones was the interim manager for the Galaxy in 2008 and was an assistant manager from 2008 to 2010. He now serves as a Galaxy analyst for Time Warner Cable SportsNet. Cobi was inducted into the National Soccer Hall of Fame in 2011. 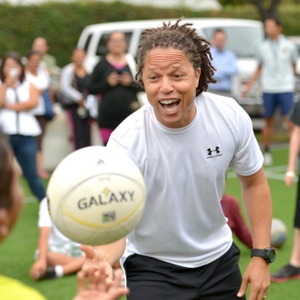