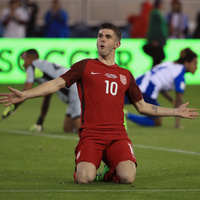 Christian Pulisic net worth: Christian Pulisic is an American professional soccer player who has a net worth of $40 million. His annual salary is $9 million. Christian also earned $5 million per year from endorsements in the years leading up to the 2022 World Cup in Qatar. In advance of the World Cup, Christian inked deals with dozens of companies, with the largest contracts coming from Puma, Hershey's, Gatorade, EA Sports, Chipotle, Panini and Perfect Play. Christian Pulisic was born in Hershey, Pennsylvania in September 1998. He is an attacking midfielder and winger who spent his youth career with Brackley Town, Michigan Rush, PA Classics, and Borussia Dortmund. Christian Pulisic played for Borussia Dortmund from 2016 to 2019 where he scored 10 goals in 81 appearances. He began playing for Chelsea in 2019 but was loaned back to Borussia Dortmund the same year. Pulisic has represented the United States in international competition at the under-15, under-17, and senior levels. He moved to Chelsea for a transfer of $73 million which made him the most expensive American player of all time. Christian Pulisic has several records in the Bundesliga and Dortmund as well as internationally. He was named U.S. Soccer Young Male Athlete of the Year in 2016 and U.S. Soccer Male Athlete of the Year in 2017.