Christian Eriksen Net Worth and Salary: Christian Eriksen is a Danish professional soccer player who has a net worth of $25 million. He first became internationally known as a member of the English club Tottenham Hotspur as a midfielder and the Denmark national football team. In 2020 he joined Inter Milan with a 4.5-year contract that pays $8 million per year.

Born in Middelfart, Denmark in 1992, he started playing soccer even before his third birthday. He played for Middelfart for over 10 years before switching to Odense Boldklub. He was named Best Technical Player while playing for OB. In 2008 Christian transferred to Ajax for a transfer fee of nearly $1 million. After playing for Ajax's youth team he was promoted to the senior squad in 2010. In August 2013 Eriksen was transferred to Tottenham Hotspur for $11 million. He started playing for the Denmark national team in 2007, where he played for their under-17, under-18, under-19, and under-21 squads before being called up to the senior level in 2010. Eriksen had the distinction of being the youngest player to participate in the 2010 FIFA World Cup which took place in South Africa. He received many honors in 2011 including Danish Football Player of the Year, Ajax Talent of the Year, and Dutch Football Talent of the Year. Eriksen signed a sponsorship deal with Nike in 2012. He made an appearance in an advertisement for Nike Green Speed II. 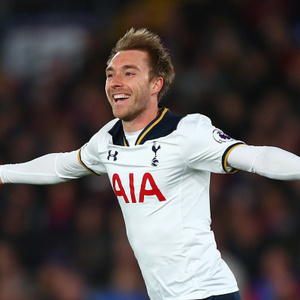