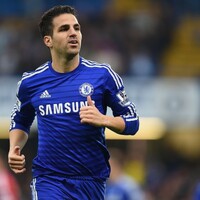 Cesc Fabregas net worth: Cesc Fabregas is a Spanish professional soccer player who has a net worth of $45 million dollars. Cesc Fabregas was born Francesc Fabregas Soler in Arenys de Mar, Spain in May 1987. He played his youth career with Mataro, Barcelona, Arsenal. In 2003 he was called up to Arsenal's senior team where he played until 2011. In 2001 he was signed back to Barcelona for $35 million pounds plus another $5 million pounds in variables. In 2014 Fabregas signed a five year contract with Chelsea for $30 million pounds. He joined the Spanish national team in 2002 and has played for the country's under-16, under-17, under-20, and under-21 teams. He joined the senior Spanish team in 2006. Since 2004 he has also represented Catalonia. Fabregas is a central or attacking midfielder. He became captain for Barcelona and broke several team records. In 2013 he won the first league title of his career with Barcelona. He led Spain to the 2003 FIFA U-17 World Championship final in Finland. He played in the 2006 and 2010 FIFA World Cups. In 2010 he set up Andres Iniesta for the winning goal in the championship game at the 2010 FIFA World Cup Final. He has had a sponsorship with Puma and appeared in an advertisement for them. In 2008 he had a television special called The Cesc Fabregas Show: Nike Live. He has won the FA Cup, La Liga, Copa del Rey, Supercopa de Espana, UEFA Super Cup, FIFA Club World Cup, and UEFA European Championship.