Carli Lloyd net worth and salary: Carli Lloyd is an American professional soccer player who has a net worth of $2 million. Carli Lloyd was born in Delran Township, New Jersey in July 1982. She is a midfielder who played soccer at Delran High School. From 2001 to 2004 Lloyd played for the Rutgers Scarlet Knights.

She started her professional career for the Central Jersey Splash in 1999. Lloyd then played for the New Brunswick Power in 2000 and the South Jersey Banshees in 2001. She played for the New Jersey Wildcats in 2004 and then for the Chicago Red Stars in 2009. Lloyd played for Sky Blue FC in 2010 and the Atlanta Beat in 2011. From 2013 to 2014 she had 18 goals in 36 caps with the Western New York Flash where she helped the team win the championship in the inaugural season of the National Women's Soccer League. She started playing for the Houston Dash in 2015. Lloyd is best known for her international soccer career representing the United States. Since 2006 she has scored 66 goals in 201 appearances for the United States side. Lloyd won two Gold medals by scoring the game winning goals in the finals of the 2008 and 2012 Summer Olympics. She won a bronze at the 2007 FIFA Women's World Cup and a silver at the 2011 FIFA Women's World Cup.  In 2008 Lloyd was named the U.S. Soccer Athlete of the Year. She is also sponsored by Nike. 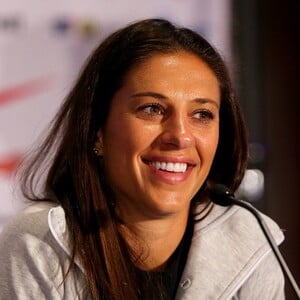