He played there until 1973 and scored 199 goals appearing in 606 matches. He then played for Preston North End from 1974 to 1975 and Waterford United in 1976. Charlton also representing England in international competition first with England Schoolboys, then up to England Youth, England Under-23, and finally for the senior side where he scored 49 goals in 106 caps. Charlton is considered one of the best midfielders of all time and won a World Cup with England as well as the Ballon d'Or in 1966. Charlton played in four World Cups. After he left Manchester United he became a player/coach for Preston North End. He then became a director for Wigan Athletic before becoming part of Manchester United's board of directions in 1984. He has won the FIFA World Cup Golden Ball, been named to the FIFA 100, and a BBC Sports Personality of the Year Lifetime Achievement Award. 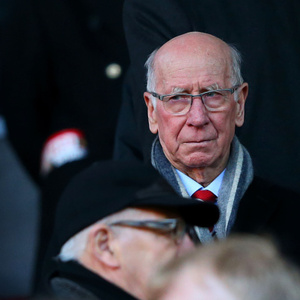