Benjamin Galindo Net Worth: Benjamin Galindo is a Mexican soccer coach and retired professional soccer player who has a net worth of $4 million. Benjamin Galindo was born in Tierra Blanca, Zacatecas, Mexico in December 1960. He was a midfielder who started his career with Tampico Madero in 1979 where he played until 1986 scoring 26 goals in 205 appearances. Galindo then played for Guadalajara from 1986 to 1994 scoring 84 goals in 271 caps. He played for Santos Laguna from 1994 to 1997 where he appeared 101 times and scored 24 goals. He next played for Cruz Azul from 1997 to 1999 where he scored 19 goals in 72 appearances. Benjamin played for Pachuca in 1999 before returning to Guadalajara to end his career from 2000 to 2001. He also represented Mexico in international competition from 1983 to 1997 scoring 7 goals in 34 caps and playing in the 1994 FIFA World Cup. Galindo started coaching CD Guadalajara in 2004. He coached Santos Laguna in 2006 before coaching Cruz Azul from 2007 to 2009. He then coached Atlas from 2010 to 2011 before winning the Clasura 2012 championship and Best Coach of the tournament award for Santos Laguna. He returned to coach Guadalajara in 2013. 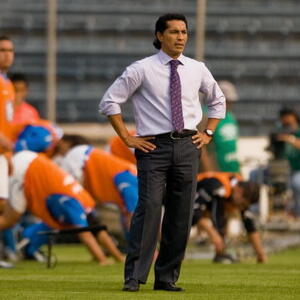