Bastian Schweinsteiger Net Worth and Salary: Bastian Schweinsteiger is a German soccer player who has a net worth of $90 million. Bastian is regarded as one of the greatest midfielders in history due to his tactical awareness and ability to control the game. He has won numerous Bundesliga titles with Bayern Munich and has earned two bronze medals and one gold medal in the FIFA World Cup.

Club Career: Schweinsteiger was born on August 1st of 1984, in Kolbermoor, Germany. In 1998, at the age of 14, he signed a contract with the professional football club Bayern Munich as part of their youth team. Over the next four years, Bastian rose through the youth's side, and by 2002, his team won the German youth championship, which earned him a place on Bayern Munich's reserves.

In November of 2002, Schweinsteiger was given his professional debut in a game against RC Lens. He made an immediate impact, creating a goal for Marcus Feulner within minutes of the match's start. Bastian signed a professional contract the next month and went on to play in 14 games during the 2002-03 season. The following season he played in 26 matches and scored his first goal against VfL Wolfsburg.

Over the next three seasons, up until the end of 2008, Schweinsteiger made 135 appearances in every match for Bayern Munich. He continued to perform well, and in 2010, Bastian extended his contract with Bayern Munich until 2016. In April of 2012, in a game against Real Madrid, Schweinsteiger scored a match-clinching penalty kick which sent Bayern to the UEFA Champions League Final.

During the 2012-13 season, Bastioned performed considerably well and received the 2013 German player of the year award. His manager described him as the best midfielder in the world. In 2015, Schweinsteiger scored a goal in his 500th and final appearance for Bayern. He then transferred to Manchester United after 17 years with the club.

Bastian played one season with Manchester United. After being demoted by Manchester's new manager, Schweinsteiger requested a transfer. In 2017, he signed with the Major League Soccer club the Chicago Fire. In his first season with the Fire, he led the team to the top position in the MLS standings, earning them their first playoff position in five years. In 2019, after two seasons in the MLS, Bastian announced his retirement from professional soccer.

International Club Career: Schweinsteiger has played in four UEFA Europe Championships and three FIFA World Cup tournaments. During the 2006 FIFA World Cup, he rose to prominence in the bronze-medal match against Portugal. He scored two impressive long-range shots, which earned him Man of the Match as Germany won the bronze medal. In 2008, he helped Germany win a silver medal during the UEFA Euro tournament.

Relationships: Bastian dated Sarah Brandner from 2007 until 2014, and they lived in Munich together. In 2014, he began a relationship with the tennis player Ana Ivanovic, and in 2016, the two married in Venice, Italy. The couple has two sons together called Luke and Leon.

Real Estate: In July of 2018, Schweinsteiger and his wife purchased a home in the small Austrian town of Westendorf. The town has 3,562 inhabitants and sits on a sunny plateau with mesmerizing views of the surrounding mountains. 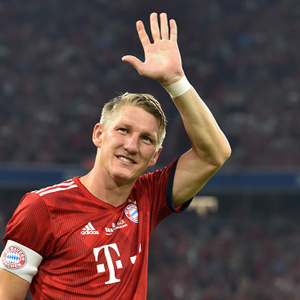