Ashley Young net worth: Ashley Young is an English soccer player who has a net worth of $9 million. He plays at the Winger and Attacking Midfielder positions. Ashley Young was born in Stevenage, England on July 9, 1985. He played in Watford's youth system before making his senior debut with the club in 2003.

He stayed until 2007, scoring 19 goals in 98 appearances. Young then transferred to Aston Villa in January 2007, where he played in 157 matches, scoring 30 goals. Since 2011, Young has been a member of Manchester United. As of 2013, Ashley Young has played in 30 international matches for England, scoring seven goals. Club honors he's received include the Football League Championship play-offs in 2006 with Watford, the FA Community Shield in 2011 with Manchester United, and the Premier League championship in 2012-13, also with Man U. Individually, Ashley Young has earned numerous awards: the Watford Young Player of the Season in 2004-05, the PFA Championship Team of the Year in 2005-06, the PFA Premier League Team of the Year in 2007-08 and 2008-09, the PFA Young Player of the Year in 2008-09. Ashley Young also was named the Premier League Player of the Month in April, September and December of 2008. 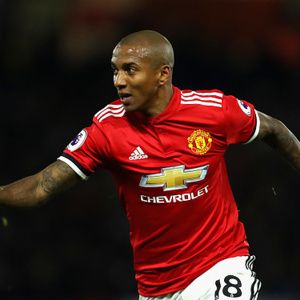