Arjen Robben net worth: Arjen Robben is a Dutch footballer (soccer player) who has a net worth of $80 million dollars. Arjen Robben was born in Bedum, Netherlands, and began playing, and excelling, at football while he was a child. He signed with FC Groningen at the beginning of his senior career, and his level of play improved noticeably during his time with the team.

In 2002, he moved to PSV, where he played stellar football. He helped lead them to a Dutch title and earned the honor of Talented Player of the Year. He was injured while with PSV, and was not able to play consistently during his second season with the team. He then signed with Chelsea, where he played well, but spent most of his time recovering from a series of severe injuries. He then spent one year with Real Madrid, and was then sent to Bayern Munich. He started slowly with Bayern, but has since proven himself. In mid-May 2014, he became the first player to score in three separate DFB-Pokal finals. 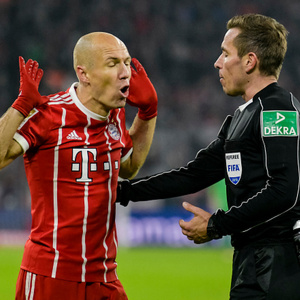