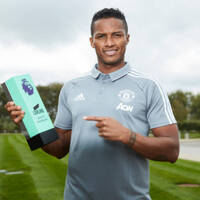 Antonio Valencia Net Worth: Antonio Valencia is an Ecuadorian footballer who has a net worth of $8 million. Born Luis Antonio Valencia Mosquera on 4 August 1985, in Lago Agrio, Ecuador, he currently plays as a winger for Manchester United and the Ecuadorian national team. Blessed with innate athletic talent, Valencia was only 11 when he caught the attention of football scout Pedro "Papi" Perlaza who signed him to the local FA-run sports academy in Sucumbíos. It didn't take him long to progress through the youth system at El Nacional, where he came to be a first team regular and made more than 80 appearances for the club. In 2005, he moved to the Spanish club Villarreal where he got the chance to make his debut along his idol Édison Méndez. Subsequently, he managed to make only two league appearances for the Spanish side amid successful loan spells at Recreativo de Huelva during the 2005–2006 season, and later at the English Premier League club Wigan Athletic in the period from 2006 to 2008. Thanks to outstanding performances, Valencia caught the eye of several high profile clubs like Real Madrid and Manchester United. It was in June 2009 that he opted to sign for Manchester United, being voted into PFA Team of the Year during his debut season. As part of Manchester, he went on to gain several wins, including the 2009–10 Football League Cup, the 2010 FA Community Shield, the 2010–11 Premier League and the 2012–13 Premier League. Furthermore, Antonio Valencia represented his country at the 2006 FIFA World Cup, the 2007 Copa América and the 2011 Copa América, having won 60 caps and scored 80 goals in the process.