Antoine Griezmann Net Worth and Salary: Antoine Griezmann is a French professional soccer player who has a net worth of $90 million. Famous for his dribbling abilities and technical prowess, Antoine is considered one of the best strikers in the modern game. Outside his club activities, Griezmann is an important player for the French national team. After several promising results, Antoine won the 2018 World Cup for his home nation.

Early Life: Antoine Griezmann was born on March 21st of 1991 in Mâcon, France. He has German roots on his father's side, while his mother has Portuguese ancestry. Although Griezmann was raised in Mâcon, he often spent his summers in Portugal. During his youth, Antoine played for his hometown club. Although he went for trials with a number of professional clubs, he was rejected by every single French side that he approached.

During one trial match, however, the Spanish club Real Sociedad noticed his potential. They eventually offered him a contract, which forced his parents to move to Spain. Although reluctant, they eventually agreed and the family relocated to San Sebastián, Basque Country.

Career: After four years in the Real Sociedad's youth system, Griezmann made his debut for the first team during the 2009-2010 season. He started well, with five goals in four appearances. After the club's starting winger was injured, he was placed on the flank for the remainder of the season. At the end of the season, Sociedad won the second league in Spain and was promoted to La Liga, the nation's top league.

During his first season playing in La Liga, Griezmann continued to score regularly. That being said, it was only during his second season that he truly began to stand out as an individual with exceptional talent. During this season, he scored an important goal to achieve a draw against Barcelona. He also showed his talents at the Champions League during this period, scoring important goals against teams like Lyon.

In 2014, Atletico Madrid snatched Antoine away from the club that had made him famous. Griezmann would reach even greater heights on this new team, and he was able to progress further in competitions like the Champions League due to a collection of talented players around him. Numerous goals followed, and by 2015 Griezmann was a household name in the world of football. A high point came in 2016, when Griezmann scored against Real Madrid in the Champions League final, although Madrid went on to win the game on penalties.

After signing a new contract with Atletico, Antoine had another strong season in 2016 before being nominated for a number of awards, including the Ballon d'Or. In 2017, Griezmann led his team to a Europa League victory, beating French side Marseille in the final.

After scoring 130 goals for Atletico, he announced that he would be leaving the club for Barcelona. In his debut season for his new team, Griezmann once again scored many goals. However, it wasn't really clear where Antoine would fit into the team since his tendency to drop back behind the attackers is very similar to the role played by Barca's talisman, Lionel Messi.

Style of Play: Antoine has been praised for his versatility, modern style of play, and work ethic. More than anything else, Griezmann is a team player who shifts and adapts based on the needs of his team at any given moment. He can play as a "true" striker or behind the forward line as an additional midfielder. He is also comfortable on the wings. Another strength lies in his ability to read the game. Aside from his footballing abilities, Antoine is known for his imaginative "meme" goal celebrations. Griezmann is not, however, particularly skilled at taking penalties.

Relationships: Antoine has been in a long-term relationship with Erika Choperena, a Basque native since 2011. After having their first child in 2016, they were married in 2017. The couple then welcomed a second child into the world in 2019. The family is reportedly Roman Catholic.

Controversy: Antoine Griezmann sparked controversy in 2017 after posting a picture of himself wearing blackface and an afro wig. He intended to impersonate a member of the Harlem Globetrotters, but the joke was clearly ill-advised and he quickly deleted the image from his social media accounts. Apologies soon followed.

Salary: Antoine's base salary is $27 million, which in some years made him one of the 10 highest-paid soccer players on the planet.

Brand Endorsements: Outside of base salary, Griezmann earns $5-6 million per year from endorsements. He is perhaps best known for his sponsorship deal with Puma, and he has appeared in many of the brand's commercials. In 2017, he revealed his own pair of custom Puma boots. Griezmann is also a regular addition to the FIFA video game series, and he appeared on the game's cover art in 2016 for its French edition (alongside Lionel Messi).

At this point, Barcelona was heavily linked with the French player. However, an alleged illegal approach set Barca back, and in 2018 Griezmann signed yet another contract extension, signaling his commitment to Atletico. After spending five years with Atletico Madrid, Antoine announced he was leaving the team in 2019. He subsequently signed for Barcelona after a 210-million-euro transfer fee, making him one of the most expensive footballers of all time. 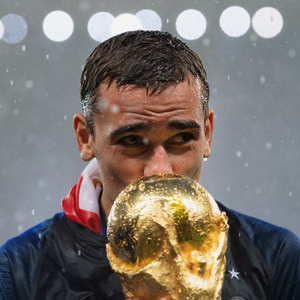