Ángel di Maria Net Worth and salary: Ángel di Maria is an Argentine professional footballer who has a net worth of $18 million. Ángel di Maria was born February 14, 1988 in Rosario, Argentina. He plays the position of winger. Ángel began practicing football according to his physician's recommendation who advised the boy's parents to let him go for sports in order to give way for to burn off energy.

At 7 years old, he started training in the local club's sports academy, but when 13 years old, he joined another club- Rosario Central. At the age of 17 he joined the team's main squad and made his debut. Within a couple of years the player had caught the interest of great European football clubs. He almost signed a contract with the Russian Rubin, but at the last moment the deal was withdrawn. As a result, the player joined SL Benfica at a modest price. In 2008, di María became Olympic champion while playing for the Argentina national team. The Olympics were his time to shine as he scored the winning goal in the final. In 2010, he became one of the famous footballers bought by Real Madrid. During two seasons he played 50 matches for the club. He played in more than 230 matches of different levels, starting from the second tier league of Argentinean championship to the Olympic Games. Many of his goals were key, either winning goals for his team or scoring in the most crucial moments, costing opponents their victories. On 26 August 2014, Ángel di María signed a five-year deal with Manchester for reportedly the fifth most expensive transfer of all time and the highest fee ever paid by a British club. 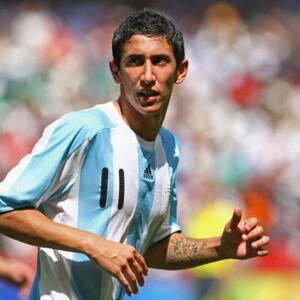