Andriy Shevchenko net worth: Andriy Shevchenko is a Ukrainian politician and former professional soccer player who has a net worth of $45 million dollars. Andriy Mykolayovych Shevchenko was born in Dvirkivschyna, Ukrainian SSR, Soviet Union in September 1976. He has scored the third most goals in Champions League history. His 175 goals for Milan mark the second most in club history.

He has also scored the second most goals for Derby della Madonnina. Shevchenko is the leading goal scorer for the Ukrainian nation team with 48. In 2004 he won the Ballon d'Or. With Milan he won the UEFA Champions League in 2003. In the 2006 FIFA World Cup Andriy was the Ukrainian captain and led the team to the quarter finals. During his professional career he played for Dynamo Kyiv, Milan, and Chelsea. He decided to quit playing soccer in 2012 and concentrate on politics. He wanted to be elected to the Ukrainian Parliament in 2012 but his party did not win representation. He married to American model Kristen Pazik in 2004 and they have three sons. Andriy is good friends with designer Giorgio Armani. He is an ambassador for the SOS Children's Villages charity and started a foundation to support orphaned children. 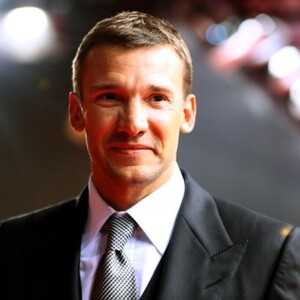