Andres Iniesta net worth and salary: Andres Iniesta is a Spanish football (soccer) player who has a net worth of $120 million dollars. Andres Iniesta was born in Fuentealbilla, Spain, and began to attract the attention of multiple youth coaches while playing for his local team as a child. He went on to join the youth academy of FC Barcelona, and subsequently captained the Under-15 team to a Nike Premier Cup victory in 1999. He began his senior career in 2001, moving up to the FC Barcelona first team in 2002. He began to noticeably improve in 2004, and has since gone on to become one of FC Barcelona's most consistent and popular players. He has been nominated for numerous sports honors and was named the UEFA Best Player in Europe in 2012. He was also named the Best Player of the 2011–12 UEFA Champions League, came in runner-up to Lionel Messi in 2010 FIFA Ballon d'Or voting, and won the La Liga Spanish Player of the Year award in 2009. He was also awarded the Marca Legend Award in 2011.

Andrés Iniesta Contract History: Andres spent 22 an unprecedented 22 years with Barcelona where he served three years as captain. In 2018 he signed a contract with Japan's Vissel Kobe that pays $30 million per year for three years. That made him one of the 10 highest-paid soccer players in the world and one of the 50 highest-paid athletes.

Andre founded a winery in 2010. One of his most famous bottles is named "Minuto 116" which is a reference of the minute he scored Spain's title-winning goal at the 2010 World Cup. 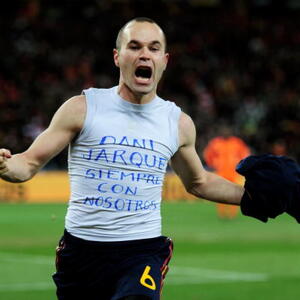