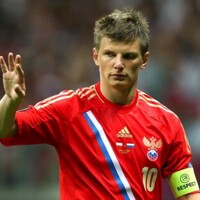 Andrey Arshavin Net Worth: Andrey Arshavin is a Russian professional footballer who has a net worth of $13.5 million dollars. Born Andrey Sergeyevich Arshavin on 29 May 1981, in Leningrad, Russian SFSR, he currently plays for the Russian football team FC Zenit Saint Petersburg. Honning his football skills since early childhood, Arshavin spent his youth career with the Zenit Saint Petersburg. In 2000, he got included in the Zenit first-team squad where he won numerous trophies including the Russian Premier League, Russian Premier League Cup, Russian Super Cup, UEFA Cup and the UEFA Super Cup. In his nine-year-long tenure with Zenit, he was also named Russian Footballer of the Year. Upon his departure from Zenit in 2009, Arshavin joined the English Premier League club Arsenal where he established himself as the most expensive player in the club's history at that time with a pay of £15 million. In February of 2012, Arshavin got back to Zenit where he still plays. Since 2001, Arshavin has been playing for the Russian national team and he is an ex-captain of the team.