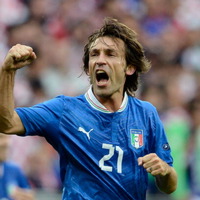 Andrea Pirlo net worth and salary: Andrea Pirlo is an Italian professional soccer player who has a net worth of $50 million. Andrea Pirlo was born in Flero, Lombardy, Italy in May 1979. He played his youth soccer for Brescia and then played for their senior club from 1995 to 1998. From 1998 to 2001 he played for Internazionale, and was loaned to Reggina and Brescia. From 2001 to 2011 Pirlo played for Milan, and since 2011 he has played for Juventus. Pirlo is a midfielder who has skills in touch, control, dribbling, technique, and passing. He is a penalty kick and set piece specialist. He has been nicknamed the architect for his ability to use long passes to set up goal-scoring chances. He is fourth on all time games played for the Italian national team, which he joined in 2002. He helped lead Italy to victory in the 2002 UEFA European Under-21 Football Championship. Pirlo was the captain of the team that won bronze in the 2004 Olympics. He was the top assist man during the 2006 FIFA World Cup, in which Italy took the championship. For that World Cup he won the Bronze Ball and was a member of the Team of the Tournament. Pirlo has won two UEFA Champions Leagues, two European Soccer Cups, five Serie A titles, a Coppa Italia, and a FIFA Club World Cup. He became a Serie A Footballer of the Year in 2012 and was part of the Serie A team of the Year. Bloomberg named Pirlo the fifth best player in Europe in 2013. He has a stake in the family's metal trading company. He owns his own vineyard in Italy and wrote his autobiography in 2013.