Alexis Sánchez Net Worth and Salary: Alexis Sánchez is a Chilean soccer player who has a net worth of $50 million. He was born in December of 1988 in Chile. For many years he played for the English soccer club Arsenal. In 2018 he moved over to Manchester United. Alexis also plays for Chile's national soccer team. He is most often seen playing the position of forward, though he also fills in as a right wing. He first debuted as a professional soccer player with Cobreloa, then transferring to Udinese Calcio, in Italy, in 2011. However, his rapid success allowed him to sign a much larger contract with Barcelona, for 25 million pounds, in 2011. This is still said to be one of the most expensive trades in Chile's soccer history. Then, in the summer of 2014, Sánchez transferred again, moving to Arsenal, for what's reported as 30-35 million pounds. The only higher transfer was that of Mesut Ozil, who was also the first Chilean player to join the team. For his athletic abilities, he has earned a number of awards. Individually, he was named Serie A Player of the Month in February of 2011. With teams he's eared awards with Colo-Colo, River Plate, Barcelona, Arsenal, and third place at the 2007 FIFA U-20 World Cup.

Alexis Sánchez Contract: In 2018 Alexis signed a new contract with Manchester United. The deal pays $21.5 million over 4.5 years. That was enough to make him one of the 10 highest-paid soccer players in the world in 2019. 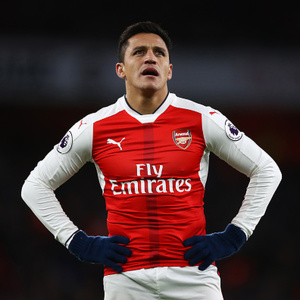