Alex Morgan net worth and salary: Alex Morgan is an American professional soccer player who has a net worth of $3 million. Alex Morgan was born in San Dimas, California in July 1989. Morgan is a forward and striker who played her youth career with Cypress Elite and for the California Golden Bears from 2007 to 2010. She played for West Coast FC from 2008 to 2009 to start her senior career. She then played for the California Storm and Pali Blues in 2010, the Western New York Flash in 2011, and the Seattle Sounders Women in 2012. Since 2013 she has played for the Portland Thorns FC and has 14 goals in 33 appearances. Morgan represents the United States in international competition and played on the United States Under-20 team in 2008 and has played for the US senior side since 2010 where she has 51 goals in 85 caps. She was the #1 pick of the 2011 WPS Draft and was the youngest player on the national team at the 2011 FIFA Women's' World Cup at 22. Morgan won a Gold medal at the 2012 London Olympics and scored the game winning goal against Canada in the semifinal game. She has been named U.S. Soccer Female Athlete of the Year and FIFA World Player of the Year. Morgan has endorsement deals with Nationwide, Nike, Coca Cola, Panasonic, and Bridgestone. She is married to soccer player Servando Carrasco.

Alex Morgan Salary Details: By winning the 2019 World Cup, the US team will split $4 million. By comparison, the French men's team split $38 million for winning the tournament in 2018. Members of the US Women's team earned a $90,000 bonus for reaching the quarterfinals (US men would have earned $550,000 for reaching the same point). After negotiating for a better deal in 2017, today members of the Women's team earn $4,950 for every tournament game they won. Average women's players earn around $167,000 per year. Star players like Megan Rapinoe and Alex Morgan can typically earn around $400,000 per year from all sources. For the 2019 World Cup each US player earned the following amounts:

Under the same deal, if the US men ever win a World Cup, each player would take home $1.1 million. 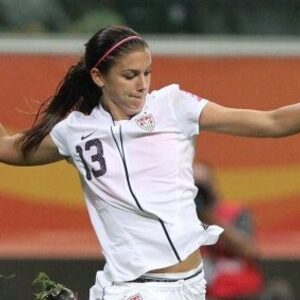