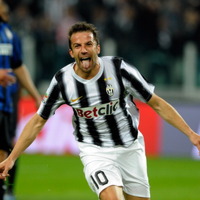 Alessandro Del Piero is an Italian soccer player, otherwise known as a footballer, who has a net worth of $25 million. He was born on November 9, 1974 in Conegliano Italy and is the current captain of the Sydney FC. As an A-League player, Del Piero is currently placed in third as an Italian all-time top scorer. He holds a record of 335 goals and is widely known as a forward who has played in three FIFA World Cups and four UEFA European Football Championships. Del Piero began his career in European football with team San Vendemiano in 1982 as a youth athlete. He later joined team Padova in 1988, followed by Juventus in 1993. During his run with Padova, Del Pierno commenced his senior football career in 1991 and continued as a senior with Juventus until 2012. After signing to Sydney FC, Del Piero became the highest-paid player known to the A-League. Along with his international success, Del Piero was an Olympic torchbearer in 2006, has made charitable contributions to AIDS victims, and has participated in several advertisements for large corporations such as Suzuki, Adidas, Fiat, and Pepsi. He is currently married to Sonia Amoruso with three children by the names of Tobias, Dorotea, and Sasha.