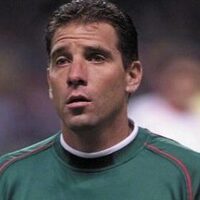 Alberto Garcia Aspe Net Worth: Alberto Garcia Aspe is a Mexican retired professional soccer player who has a net worth of $5 million. Alberto Garcia Aspe was born in Mexico City, Mexico in May 1967. Aspe was a midfielder who started his senior career with UNAM Pumas in 1984. He played for Pumas until 1991 and scored 40 goals in 180 appearances. In 1991 he joined Necaxa and appeared in 185 games scoring 69 goals. While he was playing Necaxa he was loaned to River Plate in 1995. In 1997 Alberto joined Club America. He scored 11 goals in 66 appearances before moving to Puebla in 1999 where he finished his career playing in 97 games and scoring 29 goals until retiring in 2002. Aspe also represented Mexico in international competition from 1988 to 2002. He played in 109 matches and scored 21 goals. With Mexico he played in the FIFA World Cup in 1994, 1998, and 2002. He also won a FIFA Confederations Cup with Mexico in 1999. Since retiring Alberto has become an executive for Pumas UNAM.