Adriano Leite Ribeiro net worth: Adriano Leite Ribeiro is a Brazilian professional soccer player who has a net worth of $10 million. Adriano Leite Ribeiro was born in Rio de Janeiro, Brazil in February 1982. He is a striker who has had a career marked by inconsistency. Ribeiro played his youth career for Flamengo from 1997 to 1999 and then joined their senior team from 2000 to 2001. He played for Internazionale Milano from 2011 to 2002 including being on loan to Fiorentina in 2002. Ribeiro played for Parma from 2002 to 2004 scoring 23 goals in 37 appearances. He again played for Internazionale Milano from 2004 to 2009 scoring 47 goals in 115 caps. He played again for Flamengo from 2009 to 2010 and then for Roma from 2010 to 2011. Ribeiro played for Corinthians from 2011 to 2012, Flamengo in 2012, and Atletico Paranense in 2014. He has also represented Brazil in international competition at the Under-17, Under-20, and senior levels. Ribeiro won the FIFA World Youth Championship Silver Shoe in 2001. He won the Golden Ball for The Best Player of the Tournament and Golden Shoe for Top Scorer at both the Copa America in 2004 and the Confederations Cup in 2005. 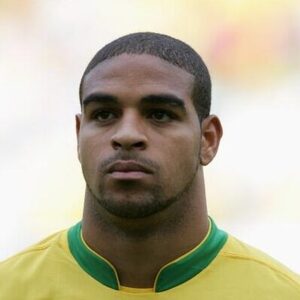