Early Life: Wambach was born on June 2, 1980 in Rochester, New York, the youngest of seven siblings, to parents Pete and Judy Wambach. Wambach was exposed to soccer early in life after her mother gave her a book explaining the rules of the sport. Wambach credits some of her competitiveness to growing up in a large family, as her brothers would often include her in their hockey games for target practice. She joined her first youth soccer league at the age of five and was soon transferred from the girls' to the boys' team due to scoring such a high number of goals.

She continued playing soccer into her high school years, attending Our Lady of Mercy High School in Rochester from 1994 to 1998. During her senior year of high school, Wambach was included in the Parade Magazine High School All-American team and was also voted the national high school player of the year by the National Soccer Coaches Association of America (NSCAA). She received a number of other accolades while in high school, including the NSCAA Regional Player of the Year, Gatorade Circle of Champions New York Player of the Year, and was recognized by USA Today as a top 10 recruit in the nation.

In addition to playing on her high school's soccer team, Wambach also participated in the Olympic Development Program and competed in a number of national and international soccer festivals and competitions. During university recruitment, Wambach was highly sought after by numerous schools but ultimately choose to attend the University of Florida in Gainesville, where she received a full athletic scholarship. Though a less-established team, Wambach helped lead the Gators to win the NCAA national championship during her freshman year, as well as four consecutive SEC championships.

Professional Domestic Career: Following her graduation from college, Wambach began playing for the professional club team, Washington Freedom for the 2002 season, during which she was named the Women's United Soccer Association (WUSA) Rookie of the Year. The following season, Freedom won the championship match following Wambach game-winning goal in overtime.

Due to financial difficulty, the WUSA folded following the 2003 season. However, Women's Professional Soccer (WPS), a new U.S. professional league, began in 2008. Again Wambach played for the Washington Freedom from 2009 to 2011 until WPS suspended operations in 2012.

The same year, yet another league was formed – the National Women's Soccer League (NWSL). Wambach played for the Western New York Flash in her hometown of Rochester, New York. She played with the team until 2015, when she decided to sit out the season in order to prepare for the 2015 FIFA Women's World Cup.

FIFA World Cup and Olympic Career: Wambach's international career is likely more well-known than her performance at the club level. She began playing for the United States women's national soccer team in 2001 and earned a spot on the 2003 U.S. women's roster for the FIFA Women's World Cup. Wambach helped the U.S. team earn the third place title in the tournament, losing to Germany in the semi-finals.

Wambach played in three subsequent FIFA Women's World Cup tournaments – 2007, 2011, and 2015. A favorite going into the 2007 Cup, the U.S. team ultimately earned third place again after a disheartening 4-0 loss to Brazil in the semi-final round. The 2011 tournament saw the U.S. team take second place, with Wambach becoming the U.S. all-time scoring leader in the FIFA Women's World Cup history during the final game against Japan. Finally, in 2015, the United States was able to win first place at the FIFA tournament, where Wambach was the captain in three of the seven games played. Wambach, who had announced that this tournament would be the last of her career, was able to help lead the team to victory in the final game against Japan.

The Summer Olympics also acted as an international stage for Wambach, who was named to the U.S. team during the 2004, 2008, and 2012 games. A win over Brazil during the 2004 games in Athens allowed the team to secure the gold medal, thanks in large part to a late game header by Wambach.

The 2008 games in Beijing ended in tragedy for Wambach when she broke her leg during an exhibition match against Brazil leading up to the games. The U.S. team was still able to take home the goal however. Wambach's final Olympic performance was at the 2012 Summer Games in London, where she scored five goals overall and again helped lead the U.S. team to victory by securing the gold medal.

Personal Life: Wambach married soccer player Sarah Huffman in 2013. The two remained married until their divorce in 2016. Wambach has not been particularly vocal about being part of the LGBTQ community, though she contends that she was never closeted.

She then began dating author Glennon Doyle, whom she met on a book tour. The two married in May of 2017. The couple remain together today and have not had any children together, though Doyle has three children from a previous marriage. 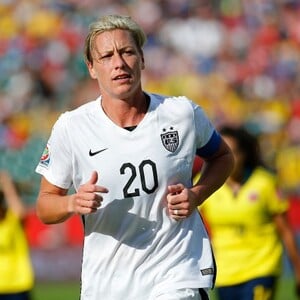