What is Xander Schauffele's net worth?

Xander Schauffele is a professional American golfer who plays on the PGA and European Tours. Xander Schauffele's net worth is $14 million. Among his career wins are the Greenbrier Classic, the Tour Championship, and the WGC-HSBC Champions. In April 2021, Schauffele finished third at the Masters in Augusta. On August 1, 2021 Xander won a gold medal at the Tokyo Olympics.

Xander Schauffele was born in 1993 in San Diego, California to a German-French immigrant father and a Taiwanese immigrant mother. Two of his great-grandfathers were footballers at the European premier level: Johann Hoffman, who played for the Austria national football team, and Richard Schauffele, who played for VFB Stuttgart. Richard also earned numerous titles in javelin, discus, and shot-put.

As a teenager, Schauffele went to Scripps Ranch High School, where he became the individual winner of the 2011 California State High School Championship. Upon graduating, he enrolled at Long Beach State University, and won two honors for his collegiate playing during his freshman year: the Big West Conference Freshman of the Year award and the First Team All-Big West award. Schauffele then transferred to San Diego State University his sophomore year. Over his three years at SDSU, he was a Ping and Golfweek Third Team All-American, and twice won the Mountain West Conference All-Academic Team Award. Moreover, Schauffele beat Beau Hossler to claim the 2014 California State Amateur Championship, and in 2015, won the Barona Collegiate Cup. He finished his college career with three wins, four runners-up, 19 top-fives, and 27 top-tens.

Schauffele went professional in June of 2015, and subsequently entered the Web.com Tour Qualifying Tournament in the fall. Taking the runner-up position in the first stage, he went on to win the second stage, and ultimately earned his Web.com Tour card in the finals, where he tied for 45th. The following year, Schauffele played a full season on the Tour, finishing 26th on the regular-season money list. He also finished 15th on the Finals money list, earning him a PGA Tour card.

In 2016, Schauffele made his PGA Tour debut at the CareerBuilder Challenge. The next year, in the first round of the US Open, he recorded a bogey-free six-under-par 66; this was the first time in the history of the US Open that a player shot a bogey-free round of 66 or better in his national championship debut. Additionally, Schauffele became one of only 15 players to reach 10 under par at a US Open. Following his opening 66, he shot rounds of 73-70-69 to finish tied for fifth place. Just three weeks later, Schauffele notched his first PGA Tour win at the Greenbrier Classic. Later, he played in the 2017 FedEx Cup Playoffs, where he moved from 33rd in the standings to 26th. 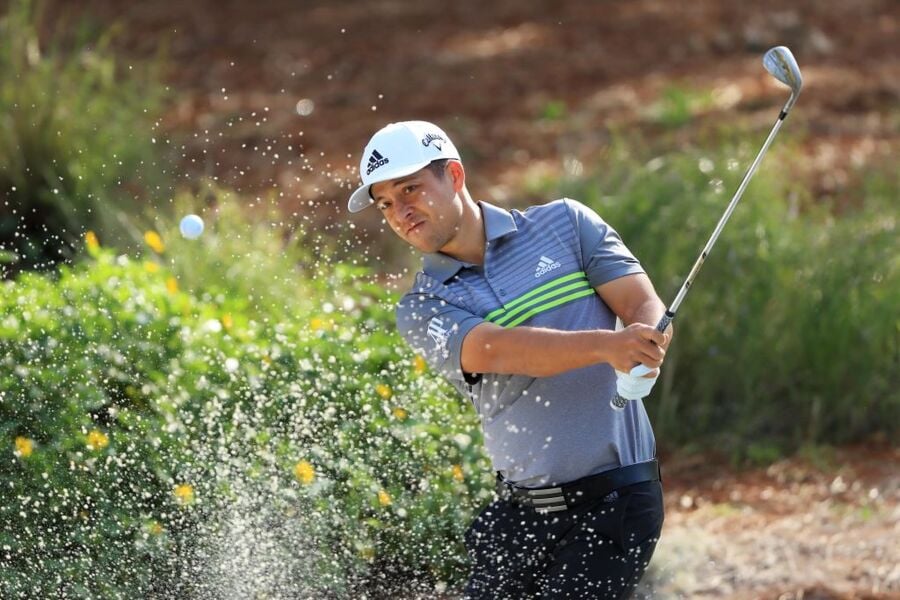 At the Tour Championship in 2017, Schauffele birdied the 72nd hole to win by a single stroke over Justin Thomas. In the process, he became the first rookie ever to win the title, as well as the first rookie to win any FedEx Cup playoff event. The victory was good enough to move Schauffele to 32nd place in the Official World Golf Ranking, up 267 spots from his 2016 year-end finish. He was also voted Rookie of the Year by his peers. In 2018, Schauffele finished T2 at the Players Championship, and tied for second at the Open Championship at Carnoustie Golf Links. When it came to the 2018 Tour Championship, Schauffele was ultimately unable to defend his title, finishing T7. Meanwhile, he placed 15th in the season-long FedEx Cup.

Greater success for Schauffele came in the 2018 European Tour, where he emerged victorious at the WGC-HSBC Champions and rose to fourth place in the European Tour's Order of Merit. He entered the final event, the DP World Tour Championship, in fifth position, and ended up finishing T16. In early 2019, Schauffele won the Sentry Tournament of Champions in Maui, Hawaii, and tied for second in the Masters Tournament, just one stroke behind Tiger Woods. Leading the field with 25 birdies, he became only the third player since 1980 to record 25 or more birdies during a single Masters. Following this, Schauffele tied for third at the US Open. In the 2019 Tour Championship, he erased a six-shot deficit after the first round, and went on to finish in second place. Moreover, he recorded his highest finish to date in the FedEx Cup, also coming in second. At the end of 2019, Schauffele played on the US team at the Presidents Cup in Australia. The team won 16-14, while Schauffele himself went 3-2-0 to win his singles match against veteran Adam Scott. Later, at the Masters in 2021, he finished third after scoring a triple bogey on his final hole.

At the Open Championship in 2019, the R&A governing body found that Schauffele's driver failed to meet CT test requirements after it performed 30 random inspections of players' clubs. His and the three other drivers that failed the test were all either manufactured by Callaway, Taylormade, or Ping.

Schauffele lives in Las Vegas, Nevada. Since 2014, he has been dating Maya Lowe, who earned her college degrees in science and public health and health care administration from the University of California, San Diego. Lowe works for Planned Parenthood.