Woody Austin Net Worth: Woody Austin is an American professional golfer who has a net worth of $7 million. Woody Austin was born in Tampa, Florida in January 1964. He was on the golf team at the University of Miami where he graduated in 1986 and turned professional the same year.

He was named the PGA Tour Rookie of the Year in 1995 when he won the Buick Open. Austin has four PGA Tour wins and also won the Buick Championship in 2004, the Stanford St. Jude Championship in 2007, and the Sanderson Farms Championship in 2013. He finished 2nd at the PGA Championship in 2007 behind Tiger Woods. He is also known for his antics such as striking himself in the head with his putter five times at the 1997, falling into a pond, and wearing swimming goggles in a match. He was part of the winning team for the United States at the 2007 Presidents Cup. He now competes on the Champions Tour and was inducted into the University of Miami Sports Hall of Fame in 2008. 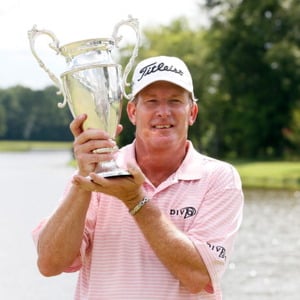