Tom Lehman Net Worth: Tom Lehman is an American professional golfer who has a net worth of $13 million. Tom Lehman was born in Austin, Minnesota in March 1959. He graduated from the University of Minnesota and turned professional in 1982. It took Lehman a long time to become a leading tour pro. He played on the PGA Tour from 1983 to 1985 with little success and then played elsewhere for six seasons. After topping the Ben Hogan Tour's 1991 money list and being named Ben Hogan tour Player of the Year he went back on the PGA Tour starting in 1992. Lehman won five PGA Tour Events starting with the Memorial Tournament in 1994. In 1995 he won the Colonial National Invitation. He won his only major at The Open Championship in 1996 and also won The Tour Championship the same year. That year Lehman was named the PGA Player of the Year and PGA Tour Player of the Year. He also took home the Vardon Trophy and Byron Nelson Award and was the PGA Tour's leading money winner. He went on to win the Phoenix Open in 2000. Representing the United States Lehman won the Ryder Cup and was a three time Presidents Cup winner. He won his Champions Tour debut tournament in 2009 and won the Payne Stewart Award in 2010. In 2011 he won the Arnold Palmer Award for Champions Tour Money List Leader and the Jack Nicklaus Trophy for Champions Tour Player of the Year, which he also won in 2012. 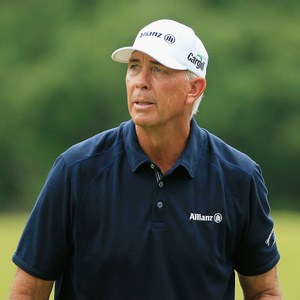