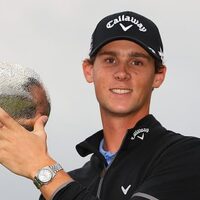 Thomas Pieters net worth: Thomas Pieters is a Belgian professional golfer who has a net worth of $4 million. Thomas Pieters was born in Geel, Belgium in January 1992. He started golfing at five years old and then competed for the University of Illinois. Pieters won the 2011 Jack Nicklaus invitational and the 2012 NCAA Division I Championship, as well as the 2013 Big Ten Conference Championship. He turned professional in 2013 and is a member of the European Tour. Pieters won the European Tour events D+D Real Czech Masters in 2015, KLM Open in 2015, and Made in Denmark in 2016. He finished tied for 30th at the 2016 The Open Championship and tied for 86th at the 2016 PGA Championship. Before 2017 Pieters had not competed as the Masters Tournament or U.S. Open. He represented Europe at the 2016 Ryder Cup and Belgium at the 2016 World Cup events.