Steve Elkington net worth and career earnings: Steve Elkington is an Australian professional golfer who has a net worth of $10 million dollars. Steve Elkington was born in Inverell, New South Wales, Australia, and went on to graduate from the University of Houston in the US. He played for the college's golf team, and quickly made a name for himself.

He began competing on the professional circuit in 1985, and has since won 10 PGA tours. His major placements include a 1995 PGA Championship win, a second place finish at the Open Championship, and a third place finish at the Masters Championship. He also has an Asian Tour win and a PGA Tour of Australasia win under his belt. He was awarded the Vardon Trophy in 1995, given to the PGA Tour player with the lowest scoring average for the season. In 2013, Steve Elkington made headlines due to inflammatory remarks he has posted to his Twitter account. Steve tweeted insensitive remarks about a helicopter that crashed and caused several fatalities. A few months later he made insensitive remarks over twitter about Michael Sam the first openly gay NFL football player. He began competing on the Champions Tour in 2013. He has earned more than $15 million from his career on the course alone. 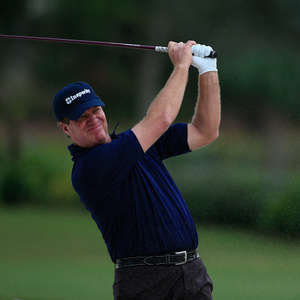