Sam Torrance Net Worth: Sam Torrance is a Scottish professional golfer and sports commentator who has a net worth of $10 million. Sam Torrance was born August 24, 1953 in Largs, United Kingdom. Torrance's father Bob was a highly respected golf instructor who coached son Sam from childhood. Sam Torrance was one of the leading players on the European Tour from the mid-1970s to the late 1990s, with 21 Tour wins.

Torrance was a member of European Ryder Cup teams on eight occasions, from 1981 to 1995 consecutively; he was on Cup-winning teams in 1985, 1987, 1989 and 1995. In 1985 he sank a winning putt, which deprived the Americans of the trophy for the first time in 28 years. He was the winning non-playing captain of the European Ryder Cup team in 2002. This made him the second European captain to sink the winning putt and captain of a winning team at separate Ryder Cups, after Seve Ballesteros in 1987 (as a player) and 1997 (as captain). Torrance was honored with the MBE (1996) and OBE (2003) for outstanding contributions to golf. Torrance currently works as a commentator for BBC Sport golf coverage. Along with Kelly Tilghman, he also provided commentary for Tiger Woods PGA Tour 09. Torrance has also appeared on the sport personality quiz show A Question of Sport five times since 2005. On 17 March 2008, he competed with Sharron Davies and team captain Phil Tufnell in the 37th season of A Question of Sport, and made history by achieving the first ever perfect score on the show since it started in 1970. He is an avid supporter of Celtic and Manchester United football clubs. 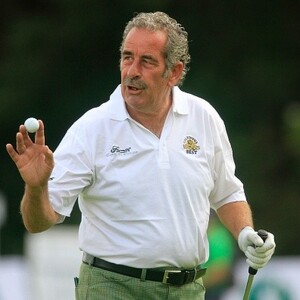