Raymond Floyd Net Worth and career earnings: Raymond Floyd is an American professional golfer who has a net worth of $20 million dollars. Raymond Floyd was born September 4, 1942 in Fort Bragg, North Carolina and raised in Fayetteville, North Carolina. Floyd graduated from Fayetteville High School in 1960. Skilled in golf and baseball, he had an offer to pitch in the Cleveland Indians organization, but chose to attend the University of North Carolina in Chapel Hill, but only stayed for a semester. After dropping out of college, he turned pro in 1961 and quickly established himself on the PGA Tour. His first victory came two years later at age 20 in March 1963 at the St. Petersburg Open Invitational, the first of his 22 wins on the PGA Tour, including four major championships. Floyd won his first major title at the PGA Championship in 1969. His second major victory came in 1976 at The Masters, by an eight-stroke margin. Floyd won his second PGA Championship in 1982. Floyd's fourth and final major title came at the U.S. Open in 1986 at Shinnecock Hills. He was inducted into the World Golf Hall of Fame in 1989. He captained the U.S. Ryder Cup team at The Belfry in England in 1989. On April 6, 2010, on the eve of the 2010 Masters Tournament, Floyd announced his retirement from competitive golf. 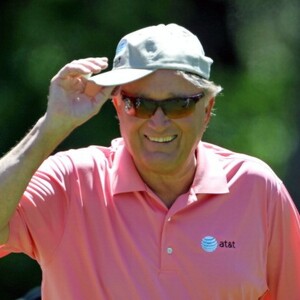