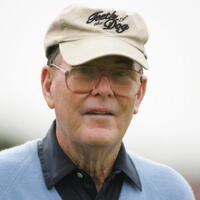 Pete Dye Net Worth: Pete Dye is an American golf course designer who has a net worth of $50 million. Pete Dye was born in Carmel, Indiana in December 1925. His father Pink built a golf course in Champaign County and Pete worked and played on the course growing up. Pete won the Ohio State High School Golf Championship and also medaled in the Ohio State Amateur Golf Championship. He joined the U.S. Army in 1944 but World War II ended before he was sent overseas. He served as a greens keeper on the base golf course at Fort Bragg. He attended Rollins College and started selling insurance. He won the Indiana State Amateur Championship in 1958 and was a million dollar salesman. Pete and his wife Alice first designed the nine hold course El Dorado. In 1962 they designed their first 18-hole course in Indianapolis. He designed the Radrick Farms Golf Course for the University of Michigan in 1962. He designed the Crooked Stick Golf Club in Carmel, Indiana, which hosted the 1991 PGA Championship. He worked with Jack Nicklaus to design the Harbour Town Golf Links which hosts an annual PGA Tour event. Dye's signature styles include small greens and railroad ties to hold bunkers. He designed the 17th hole at TPC at Sawgrass known as the "Island Green" and the "world's most terrifying tee shot". Pete received a PGA Tour Lifetime Achievement Award in 2005. He was inducted into the World Golf Hall of Fame in 2008 and has been named Architect of the Year by Golf World magazine.