Harrington's three major championship wins include The Open Championship (2007 and 2008) and the PGA Championship (2008). His first professional victory was in the 1996 Peugeot Spanish Open. The youngest of five sons, Harrington's father "Paddy" was a Gaelic football player for Cork in the '50s, as well as a boxer, hurler and golfer. In 2012, Harrington finished 'tied' 8th at the Masters and 'tied' 4th at the U.S. Open. Later that same year he went on to win the PGA Grand Slam of Golf in Bermuda. He became a Global Ambassador for Special Olympics, the world's largest sports organization for people with intellectual disabilities. He also conducted a number of golf clinics for Special Olympics athletes and coaches in 2010. Harrington has known his wife since childhood. The couple wed in 1997 and have two sons, Patrick (2003) and Ciarán (2007). 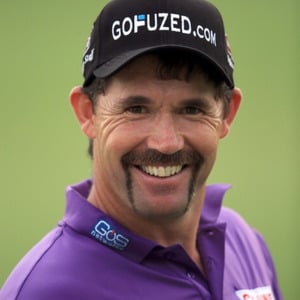