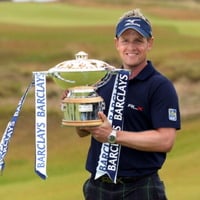 Luke Donald net worth: Luke Donald is an English professional golfer who has a networth of $40 million. Donald spent a total of 55 weeks as the World Number One golfer and has been in the Top 10 for over 200 weeks. Though born in England, Donald joined College Prospects of America to send out his resume for colleges to recruit him, and eventually took a scholarship with Northwestern University. In 1999, he won the individual NCAA Division I Men's Golf Championships in 1999, beating the scoring record that was formerly held by Tiger Woods. Donald turned professional in 2001 and earned his tour card for the 2002 season, making his first PGA Tour start at the Sony Open in Hawaii. He finished tied for 13th. He won his first title in March of 2002 at the Southern Farm Bureau Classic. After a successful rookie season, he became just the 11th rookie in PGA Tour history to earn more than $1 million in his first year. In 2005, he finished tied for 3rd in his very first Masters, his best finish at the event to date. In 2011, Luke Donald defeated German Martin Kaymer 3-2 in the WGC-Accenture Match Play Championship to record his first and only World Golf Championship title. Thanks to multiple wins during the year, he finished 2011 with numerous awards, including the PGA Player of the Year and European Tour Golfer of the Year.