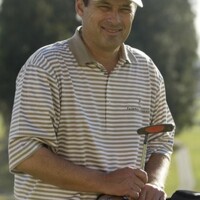 Loren Roberts Net Worth: Loren Roberts is an American professional golfer who has a net worth of $10 million. Loren Roberts was born in San Luis Obispo, California in June 1955. He played golf in high school and for Cal Poly – San Luis Obispo. After his school dropped the golf team Roberts turned pro in 1975 after his sophomore season. He worked as an assistant pro at the San Luis Obispo Golf and Country Club and the Morro Bay Golf Course. He won the Foot-Joy PGA Assistant Professional Championship in 1979 and briefly competed for the PGA Tour of Australia. Roberts has eight PGA Tour wins including winning the Nestle Invitational in both 1994 and 1995. In 1996 he won the Greater Milwaukee Open and the CVS Charity Classic. Roberts won the GTE Byron Nelson Classic in 1999 and again won the Greater Milwaukee Open in 2000. In 2002 he won the Valero Texas Open. He also represented the United States and won the Presidents Cup in 1994 and 2000 and the UBS Warburg Cup in 2001. He finished 2nd at the U.S. Open in 1994 and 3rd at the Masters Tournament in 2000. He also finished 5th at the 1990 PGA Championship and 7th at The Open Championship in 2000. Loren joined the Champions Tour in 2005 and has one five senior majors. He won the Byron Nelson Award in 2006 and 2007 and the Charles Schwab Cup in 2007 and 2009. He has been hosting the annual Loren Roberts Celebrity Pro-Am since 1995 and co-wrote the book Focus: The Name of the Game which was published in 1999.