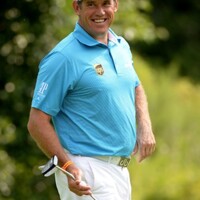 Lee Westwood net worth: Lee Westwood is an English professional golfer who has a net worth of $40 million. Lee Westwood was born in Worksop, Nottinghamshire, England in 1973. He is one of the few golfers to win tournaments on every major continent. Lee Westwood has won in both the European Tour and the PGA tour and was named player of the year in 1998, 2000, and 2009. Lee Westwood began playing golf late for someone who turned pro and has such a dominant and successful career. He began playing when he was 13 with half a golf set given to him by his grandparents. Less than two years later, Lee Westwood was the junior champion of Nottinghamshire and by 1993, he won the British Youth Championship and turned pro. Lee Westwood has represented Europe in eight Ryder Cups. He became the number one golfer in the world in October 2010, ending Tiger Wood's long streak on top of that list. Lee Westwood's ranking lasted 22 weeks. Lee Westwood's best major tournament showings are: 2nd in the 2010 Masters Tournament, he was 3rd in the 2008 and 2011 U.S. Opens, 2nd in the 2010 The Open Championship, and he tied for 3rd in the 2009 PGA Championship. Lee Westwood and his wife Laurie have two children.