Kirk Triplett Net Worth: Kirk Triplett is an American professional golfer who has a net worth of $9 million. Kirk Triplett was born in Moses Lake, Washington in March 1962. Triplett earned a golf scholarship to the University of Nevada in Reno. He became a professional in 1985. As a part of the PGA Tour Triplett had three wins with the first one coming in 2000 at the Nissan Open.

He won the Reno-Tahoe Open in 2003 and then the Chrysler Classic of Tucson in 2006. As a part of the Nationwide Tour Triplett won the News Sentinel Open in 2011. He has also won the Alberta Open in Canada in 1988, the California State Open in 1991, and the Merrill Lynch Pebble Beach Invitational in 1996. He joined the Champions Tour in 2012 and won the Nature Valley First Tee Open at Pebble Beach in 2012 and 2013. In 2014 he has won the ACE Group Classic and the SAS Championship. Triplett won the Presidents Cup in 2000 representing the United States. He finished 6th at the Masters Tournament in 2001 and 2004 and 7th at the U.S. Open in 2001. He is part owner of Hole in One International which is a hole in one insurance company. 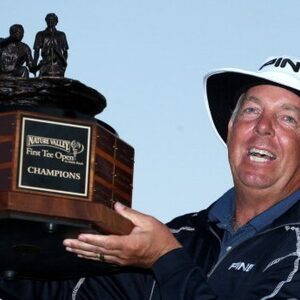