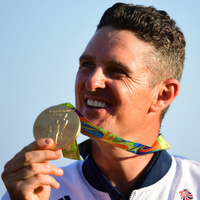 Justin Rose net worth:  Justin Rose is a British professional golfer who has a net worth of $40 million dollars.  Justin Rose was born in Johannesburg, South Africa, and grew up in England. He began to play golf when he was in kindergarten and quickly distinguished himself. He played in his first Walker Cup when he was 17 years old. His first few years as a professional player were largely unsuccessful, and though he joined the European Tour in 1999, he was unable to retain his pro tour card the following year. Then, in 2002, he finally found his stride, and began to place well. Since then, he has won five PGA tour events, six European Tour events, and one event each on the Japanese Golf Tour, the Sunshine Tour, and the PGA Tour of Australasia. He placed fifth at the Masters Tournament in 2007, third at the PGA Championship in 2012, and he won the U.S. Open in 2013. As of this writing, Justin has earned more than $50 million in prize money alone. He has also earned millions more from endorsements.