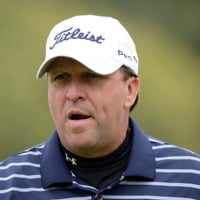 Jim Gallagher, Jr. Net Worth: Jim Gallagher, Jr. is an American professional golfer and sportscaster who has a net worth of $10 million. Jim Gallagher, Jr. was born in Johnstown, Pennsylvania in March 1961. Jim's father was a career club pro and started him playing golf at six years old. Jim attended the University of Tennessee and turned professional in 1983 before joining the PGA Tour in 1984. Gallagher has won five events on the PGA Tour including his first at the Greater Milwaukee Open in 1990. In 1993 he won both the Anheuser-Busch Golf Classic and The Tour Championship. Gallagher won two more events in 1995, the Kmart Greater Greensboro Open and the FedEx St. Jude Classic. He finished 2nd at the PGA Championship in 1992 and 11th at the U.S. Open in 1991. His best finish at the Masters Tournament was 17th in 1991 and at The Open Championship was 47th in 1994. Gallagher was also victorious representing the United States at the Ryder Cup in 1993 and the Presidents Cup in 1994. Jim works as a golf analyst for the USA Network. His wife Cissye is a former LPGA Tour player and his sister and brother are also touring pros. Jim and Cissye have four children together.