Jesper Parnevik net worth: Jesper Parnevik is a Swedish professional golfer who has a net worth of $25 million. Jesper Parnevik was born in Botkyrka, Sweden in March 1965. He now resides in Jupiter, Florida. Parnevik turned professional in 1986. He joined the Champions Tour in 2015 and has previously competed on the PGA Tour and the European Tour. Jesper Parnevik finished 2nd at the 1994 The Open Championship and tied for 2nd at the 1997 The Open Championship. He tied for 5th at the PGA Championship in 1996. Parnevik tied for 14th at the U.S. Open in 1998 and tied for 20th at the Masters Tournament in 2001. His European Tour wins include the Bell's Scottish Open in 1993, the Volvo Scandinavian Masters in 1995, the Trophee Lancôme in 1996, and the Volvo Scandinavian masters in 1998. Jesper Parnevik won the PGA Tour events Phoenix Open in 1998, Greater Greensboro Chrysler Classic in 1999, Bob Hope Chrysler Classic in 2000, GTE Byron Nelson Classic in 2000, and Honda Classic in 2001. Jesper and his wife Mia have four children. One of their children is a pop star. Since 2015 the family has starred in a reality show called Parneviks that airs on TV3 in Sweden.

Tiger Woods/Elin Nordegren Connection: Jesper Parnevik is somewhat notable for introducing Elin Nordegren to Tiger Woods. In the late 90s Elin was working at a clothing store in Stockholm that Jesper's wife Mia Parnevik owned. Jesper and Mia subsequently hired Elin to work as their au pair as they moved to Florida. Jesper introduced Elin to Tiger at the 2001 Open Championship. Years later Jesper would express regret for introducing them due to Tiger's eventual infidelities. 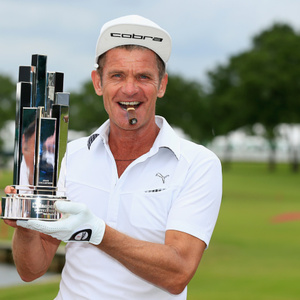