How much is Jeff Maggert Worth?

Jeff Maggert Net Worth: Jeff Maggert is an American professional golfer who has a net worth of $9 million. Jeff Maggert was born in Columbia, Missouri in February 1964. Jeff was raised on a golf course and was an All-American as a member of the golf team at Texas A&M University. He turned professional in 1986 and became Player of the Year and leading money winner on the Ben Hogan Tour in 1990. Maggert joined the PGA Tour in 1991. He has three PGA Tour wins which started at the Walt Disney World/Oldsmobile Classic in 1993. He won the WGC-Anderson Consulting Match Play Championship in 1999 and the FedEx St. Jude Classic in 2006. Maggert also won the Texas State Open in 1988, 1990, and 1994. He won the St. Louis Open in 1998 and the Malaysian Open in 1999. He won the Vines Classic in Australia in 1990 and Diners Club Matches in 1994 and 1997. Jeff finished 3rd at the U.S. Open in 2002 and 2004 as well as finishing 3rd at the PGA Championship in 1995 and 1997. He finished 5th at the Masters Tournament in 2003 and at The Open Championship in 1996. Maggert won at his Champions Tour debut in 2014 at the Mississippi Gulf Resort Classic. He has also representing the United States in international competition winning at the Presidents Cup and the Ryder Cup. 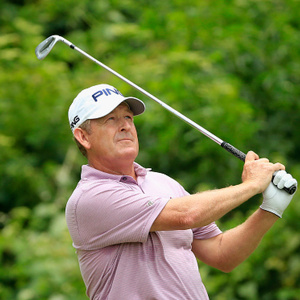