Jason Dufner net worth and salary: Jason Dufner is an American professional golfer who has a net worth of $14 million. Born in Cleveland, Ohio on March 24, 1977, Dufner is well known for participating in the PGA Tour and has won three times. He attended Auburn University and became a professional golfer in 2000. He began playing golf at age fourteen and began his amateur career in college. He stands at five feet and ten inches and is currently married to his wife, Amanda Boyd. He was a walk-on for Auburn University. He won three times in college and in 1997 he was an Honorable Mention All-American. His biggest success is winning the 2013 PGA Championship. Dufner was runner-up in the 2011 PGA Championship after losing a playoff to Keegan Bradley. In September 2012 he achieved his highest ranking of 6th. He has held a spot in the top 10 of the Official World Golf Ranking for a total of 35 weeks. His best finish in the U.S. Open is 4th. In 2013 he finished 20th in the Masters Tournament and 26th in The Open Championship. Duffnering has become a term in social media for having an expressionless face and slumped sitting position. Jason married Amanda Boyd in 2012. He has competed for the United States in international competition in the Ryder Cup in 2013, and won the Presidents Cup in 2013. 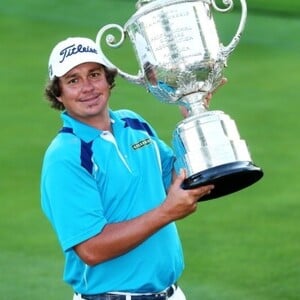