Ian Poulter net worth, car collection and career earnings: Ian Poulter is an English professional golfer who has a net worth of $60 million dollars. Ian Poulter was born in Hictchin, Hertfordshire, England in January 1976. He started playing golf at four years old and then worked in the golf shop at the Chesfield Downs Golf Club. He turned pro in 1996 and his first win was at the Open de Vote d'Ivoire in 1999. Poulter joined the PGA Tour in 2005 and the European Tour in 2000. He has 16 professional wins including 12 on the European Tour. In Major Championships Ian finished 2nd at The Open Championship in 2008. He tied for 3rd at the PGA Championship in 2012 and finished 7th in the Masters Tournament the same year. In 200 he was awarded the Sir Henry Cotton Rookie of the Year. He is known for his eccentric fashion style. He has been involved in controversy including posting anti-Semitic comments and posting a video of he and his children eating cereal out of the Ryder Cup trophy. He is sponsored by many companies including Mutual of Omaha, Titleist, Nikon, EA Sports, MasterCard, Oakley, and Fathead. He is married to wife Katie and they have four children. As of this writing, Ian has earned more than $40 million in career tournament winnings.

Car Collection: Ian Poulter is an avid (and borderline obsessive) collector of Ferraris. At his Florida home he keeps an astounding 14 Ferraris! He collection includes a 288 GTO, an F40, an F50, an Enzo, a LaFerrari and a 1962 California Spider which on its own is worth $11 million. In total, Ian Poulter's car collection is worth north of $25 million! 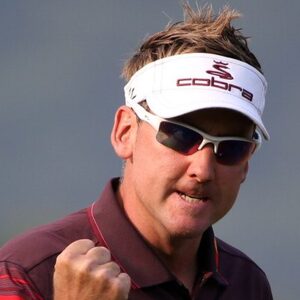